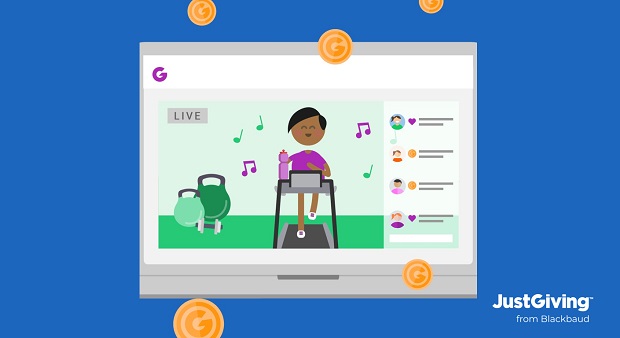 We might have only introduced livestreaming on our Fundraising Pages less than a month ago, but we’ve already seen an amazing response from fundraisers and charities. Some people have incorporated livestreams into their existing fundraising as a way to encourage extra donations, whilst others have created entire challenges around it.

Whether you’re new to the world of livestreaming or a seasoned broadcaster, we want to give you some extra fundraising inspiration. That’s why we’ve rounded up 10 of the best livestream fundraising examples that we’ve seen on JustGiving so far. So, get your popcorn ready as we’re jumping straight in…

Our first fundraiser, Heather Blackhall, decided to raise money for St George’s coronavirus action fund using only her one meter high garden steps. Walking up and down the steps a total of 1,345 times, Heather challenged herself to climb the equivalent height of the UK’s highest mountain, Ben Nevis. She livestreamed herself while she walked and managed to not only complete the challenge, but also raise 310% of her fundraising total!

Trusting a loved one to cut your hair can be a nerve-wracking experience at the best times, however Harrison Gurney asked his wife to shave his head and decided to livestream it for all of his friends and family to see. If you instinctively reached up to touch your head just reading that, then rest assured that it was all for a great cause. Harrison’s hair (fund)raising experience led him to raise over £1,000 for Crossroads Care Richmond & Kingston upon Thames, a charity where his wife currently volunteers.

One of Jane McMenemy’s favourite pastimes is to watch the live enclosure cameras at Edinburgh Zoo, especially to find out updates about their resident panda, Yang Guang. When the zoo closed it’s doors due to coronavirus, Jane decided to put her swimming abilities to the test in order to support the Royal Zoological Society of Scotland. Using her 10 foot paddling pool she managed to swim five miles and raise over £1,300! Her husband set up the livestream and read the supporter comments to her as she swam. Well done Jane!

Leeds based DJ duo, Black Market Stereo UK, decided to provide some much needed entertainment for people whilst also raising valuable funds for NHS Charities Together. The pair used Twitch and JustGiving to livestream 48 hours of back-to-back tracks, encouraging local artists to email them with any original artwork or music that they would like to be included. Their music got people dancing and donating, with the Fundraising Page receiving over £3,200 from 245 supporters.

Set up by CALM’s fundraising manager, Fae Evelyn, this Fundraising Page livestreamed a celebrity Mario Kart tournament as part of their campaign to raise awareness of mental health awareness week. Supporters were encouraged to check out the full celebrity line-up in advance on the charity’s social media pages and then head over to either JustGiving or Twitch to donate as they watched live.

The force is strong with this one.

Proving that any hobby or interest has the potential to become a great fundraising challenge, Iain Dickinson raised £200 by watching all 11 Star Wars films in one day. Raising money for NHS Charities Together, Iain livestreamed his commentary as his powered through the galaxy, we mean movies (sorry, we couldn’t resist one more joke). Great efforts Iain!

Daisy and Holly are two young sisters who wanted to put their lockdown daily exercise to good use. Setting a combined goal of running 150km throughout the month of May, they hoped to raise a pound for every kilometre in aid of the Scottish Association for Mental Health. The pair absolutely smashed their target and ended up not only running a total of 200km, but also raising over £2,300!

Roy Ham had seen the importance of Guide Dogs’ work first hand after his mother suddenly lost her sight and needed extra support adjusting to her new way of life. Deciding that he wanted to give back to the charity, he set up a JustGiving Fundraising Page and hosted a 24 hour gaming marathon on Twitch. We don’t know if it was his great gaming, or the fact that he shared his personal story with donors, but Roy managed to raise 111% of his fundraising goal.

We continue to be surprised about the unique ideas fundraisers come up with and Bernard Magee’s live Bridge lessons are no exception! Bernard has recorded and livestreamed multiple lessons on how to play and advance in the card game Bridge, all in the name of fundraising for Cancer Research UK. To date he’s managed to raise over £23,000 and gain nearly 800 supporters, incredible!

David McMichael put his fundraising fate in the hands of his donors by organising a 24-hour livestream. The twist? In exchange for their donation, viewers could also give David suggests of activities and challenges he could do within the 24 hours. Luckily for David, his friends thought it was a great idea and helped him to raise over £1,000 for Dementia NI.

Get your fundraisers involved!

As you can tell from our top 10 list, livestreaming opens up a whole world of possibilities when it comes to fundraising challenges and ideas. It also pairs perfectly with virtual fundraising events, helping your fundraisers to engage both with their activity and the donors supporting them – something which is particularly important in times when events can’t happen face to face. If you’re interested in finding out more about livestreaming, or even finding out about the types of livestreaming events that your charity could organise, then read our handy blog on ‘How to harness livestreaming’s fundraising power’.