3 insights from the science of giving 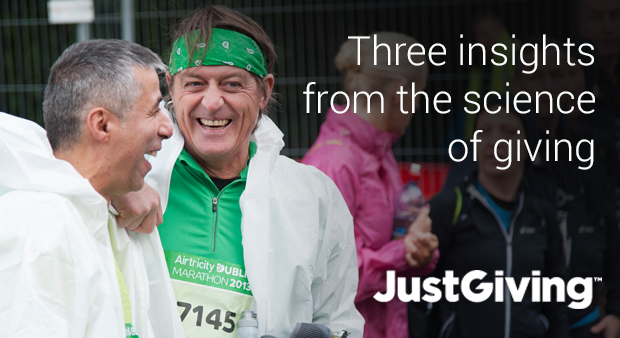 Over the past years research has proved that giving makes us happier, and that people who give are healthier. The academic world is still finding out more, especially about what motivates people to give. Here are three insights from recent research:

People give more when it’s a conversation

Instinctively we know that communication is a huge part of giving – but how much difference does it make? In a 2010 lab study based around the ‘dictator game’ (where one person chooses whether they want to share cash with another) researchers were able to prove that the ‘dictator’ was more likely to give money away if they can hear the voice of the recipient –in fact any time the recipient spoke, giving increased.  Communication was the key in unlocking altruistic behaviour from the giver. Interestingly enough it wasn’t the content of the ask from the recipient which mattered – just the fact that they had vocalised it.

Recent media reports have highlighted that often people feel coerced into providing help for good causes, whether it’s via face-to-face fundraising or through the post. Does this feeling of losing control affect how we feel about giving? The answer is yes, and a few studies back this up.
Firstly, in a diary study of university students, researchers proved that the students felt happier on days when they had done something altruistic, but only when it felt like they had chosen this action. If students felt like they had done a helping action because they had to, they felt worse than on days when they chose to help.

In another study participants hooked up to a brain-scanner were given $100 to donate. One group were instructed to make a mandatory donation with the money to a food bank, and the other group were asked whether they wanted to do it. The brain scans showed that all of the giving activities lit up the reward centre in the brain – however, mandatory giving had a lesser effect than when the subjects actively chose to donate to the food bank.

Commitment and recognition can increase donations

If you make a commitment are you more likely to give? Possibly if you add an extra element of public recognition.

When they looked at the results there was no significant difference between the first and second groups – the pledge wasn’t more effective than the pure ask. However, when the pledge was combined with public recognition donations increased by 22%.

So, how can these academic findings apply to the real world of fundraising for charity?  Firstly, remember that a human voice can have a huge impact – use the real voices of beneficiaries in video, and experiment with first-person narrative when you’re writing appeals. Secondly, adding an element of choice to your call-to-action is worth a go, even if it’s just adding copy such as “it’s your choice whether you help or not” to your communications. Finally, find ways of acknowledging your supporters in their local communities, even if it as simple as publishing a name on a list.

charitydatainsights
Elizabeth helped transform JustGiving from a tiny start-up in 2001 into becoming the world's largest online fundraising community. As head of insight she’s responsible for understanding the behaviour and needs of JustGiving’s 13 million + users.
Scroll To Top