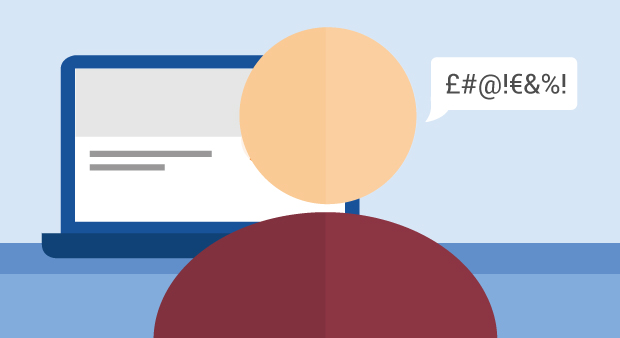 At some point in your social media career, you’ve most likely met a troll. There’s no getting away from them. They’re out there, lurking behind their keyboards and waiting for an opportunity to drag down your amazing work with their relentless negativity.

But trolls are not the only people who might attempt to publicly shame you on social media. Legitimately disgruntled people often air their frustrations online for all the world to see.

When someone attacks your work, it can be difficult to know how to respond. Here’s an 8-step plan for how to deal with social media negativity.

1. Work out whether they’re a troll or a person with a genuine reason to be upset

There’s a very big difference between a troll and someone who has a genuine complaint about your organisation.

Trolls post deliberately provocative messages with the sole intent of upsetting people. If the person being negative is a former disgruntled volunteer, staff member or donor with a genuine complaint, they are not a troll.

2. Listen to what they have to say

It’s really important that you pay attention to what’s being said.

There’s a big difference between founded negativity around something your organisation has done and general abuse or hatred towards charities.

Whether the person has a real complaint against your organisation or they’re trolling you for the fun of it, it’s really important that you read and fully understand what it is they’re saying.

When people troll your social media, they are doing it for one reason only: they want a response.

After you have taken the time to consider their comment and decided that their accusations are false and without merit, ignoring them is probably the best thing to do.

You may want to respond once, but be prepared for them to come back at you with something else. Don’t engage in a war of words, and make sure you are calm when you construct your response. If they sense you’re angry or defensive, this will spur them on.

Nothing makes you look guiltier than a deleted comment. If you’re caught deleting negativity, it can backfire badly, especially if they have screenshots of their original posts.

5. Take them away from the public

If there’s a real problem and you need to discuss it with your negative poster, take them away from the public as soon as you can. Ask them to message the page so that you can dea  l with them directly, or give them an email address to contact.

6. Ban people from your page, but only when appropriate

This should be reserved for the most serious offenders only. If trolls are posting hate speech or offending people directly on posts, then it might be time to remove their podium by banning them from your page.

7. Use exclusions when you need to

You may find that you’re most commonly trolled on boosted posts, because you’re opening up your content to a new audience.

In this instance, you can use exclusions to limit your exposure to potential trolls.

For example, if you’re advertising a vegan charity, you can limit your exposure to trolls by excluding those who like vegan groups but also like groups associated with farming.

This is really important for larger organisations where there is more than one person monitoring social media. You must make sure that the way you respond to people is consistent.

A policy will tell staff exactly what to do if your platform is subject to negativity when they’re in charge.

Make sure all staff know not to try and defend the charity via their personal profiles, especially if the negativity comes from a troll, and even if they’re offended. Negativity must be dealt with officially.

What are your charity’s top tips for dealing with social media negativity? Tweet us @JGCauses or comment below.