Anniversaries can remind your donors to give 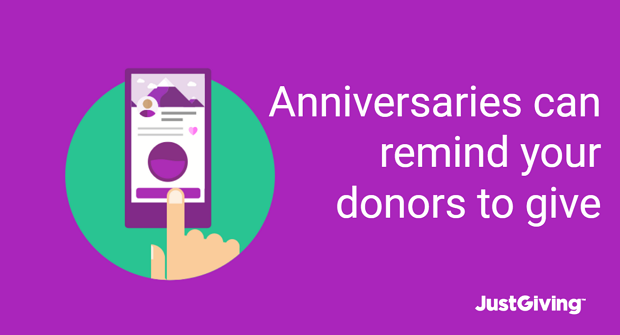 Sunday is Remembrance Day, a day in which we come together to remember the end of World War I. In the run-up to this occasion, you’ll find Royal British Legion charity workers selling poppies, and other armed forces charities asking for donations to support veterans and their families.

Lots of small to medium-sized charities rely on anniversary giving on occasions like Remembrance Day. In fact, there are some organisations who find that the majority of their donations are received during these periods.

Often, you may not be aware that the day you’re celebrating was started by a charity.

WWF, for example, launched Earth Hour in 2008 in an attempt to engage Australians in a conversation about climate change. Twelve years on, the event sees buildings like Big Ben and the Sydney Opera House switching off their lights in honour of the planet.

The day has become synonymous with taking care of planet Earth. As well as asking people to give a technology-free hour of their time, it’s a great opportunity for WWF to ask people to contribute to their conservation work.

There are other environmental charities promoting themselves in advance of Earth Hour, but WWF very much own the day.

Sometimes charities are lucky enough to become synonymous with anniversary days that they didn’t create.

The most timely example is how the Royal British Legion are linked to Remembrance Day. The significance of the day itself was not created for charitable purposes, but the two have become intrinsically linked. Sales of poppies help members of the armed forces and their families, and millions of people buy and wear them every year.

World Mental Health Day is held annually in October, and though it’s pushed largely by the World Health Organisation, Mental Health Foundation host their own, prominent fundraising day to mark the occasion.

Anniversaries are an opportunity

You might not be to commandeer an anniversary just to promote your charity, but anniversary days are certainly a good opportunity to engage your supporters by showing them relevant content.

Have a real think about your organisation and the kind of work you do, and then search for days that might be really relevant. They are a great opportunity to promote your cause to your supporters to your social media followers and email lists. It might even be an opportunity to target colder audiences with relevant content through targeted Facebook advertising or Google campaigns.