Celebrity charity endorsement: does it work and should we do it? 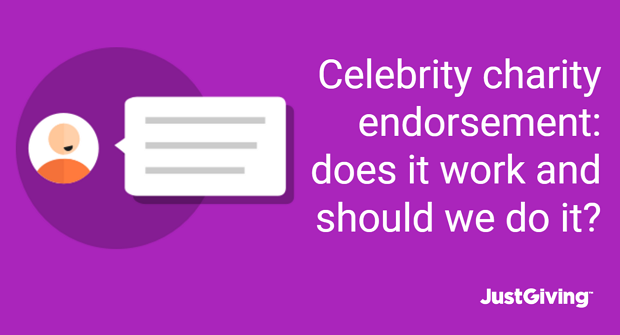 We are well and truly in the age of celebrity endorsement. Famous people are paid thousands of pounds to promote trainers, make-up, venues, locations and food on their social media platforms.

Have you ever been tempted to buy anything because you’ve seen a celebrity endorsing it? I have to admit I have. I’m not sure whether it was the celebrity encouragement that won me over, but in some cases, famous people made me aware of something I was looking for.

Businesses pay thousands of pounds for one post depicting celebrity support, so there must be something in it for them, otherwise, they’d stop. Charities do it, too.

Celebrities have been promoting charitable causes for a long time. The most famous instance of this has to be Bono and Live Aid. Endorsements like these raise awareness, money and eyebrows; there are many who want to know why exceedingly wealthy celebrities don’t just club together to donate the money needed instead of asking the public for it.

If these celebrities care so much, why don’t they just pledge a portion of their wealth to the cause? There’s no proof that they don’t of course.

This kind of criticism is certainly something you need to be aware of if you’re planning on enlisting celebrity support.

Would you tune into Comic Relief if it wasn’t hosted by a popular comedian and didn’t contain appearances by your favourite celebrities? Probably not. It’s unlikely that these charity drives would raise the amount of money they do annually without the support of people with influence and the number of people they reach as a result.

There is no denying that fans of a celebrity often follow their activity and support the things they do with great loyalty. But is that ethical? Should we be asking people to donate on the basis that they’re influenced by their admiration or adoration for someone? Don’t we want our donors to give on the basis that they care about our cause?

One way to counteract such criticism would be to make sure you’re choosing a celebrity to endorse you who does actually care about your mission. Pick someone on the basis that they actually want to help, or a personal connection to your cause – not because you think their followers might be affluent or are more likely to respond to whatever their favourite celebrity asks them to do.

Bigger charities are really good at doing this. In December, George Ezra hosted a charity gig in London to raise money for Mind, but it wasn’t a charity he had chosen at random; the singer-songwriter is has been talking about his struggles with anxiety and mental health for years. The vegan reality star, restaurant owner and influencer Lucy Watson regularly pledges her support to PETA. Swap those two around and it might not make so much sense.

Charities open themselves up to criticism when it looks as though they’re asking celebrities who have no relevance to their organisation to get them donations purely due to their influence, so if you’re looking for a celebrity endorsement, whether you’re paying them to help you or not, make sure it’s someone who makes sense.

Celebrities are people. Sometimes they make mistakes. If they do something wrong and they are associated with your organisation, you can bet everything you have that the newspapers are going to ask you why you were allowing them to support your charitable work. Bear that in mind when you’re looking for someone to endorse you, and have a damage control PR plan lined up for your charity just in case.

So should we do it?

There is no denying that celebrities have power and influence. We know that Google and Facebook advertising work for charities because these platforms will help you to reach a relevant audience and attain donations. Celebrities do the same. Utilised in the right way, famous people are a great way to shout about your work and how important it is.

So yes, you probably should look at gathering celebrity support if you can, as long as you have the right intentions and you choose a celebrity for the right reasons. Be ethical and sensible and you can’t go too far wrong.