Emergency appeals: tips and insights from The National Videogame Museum 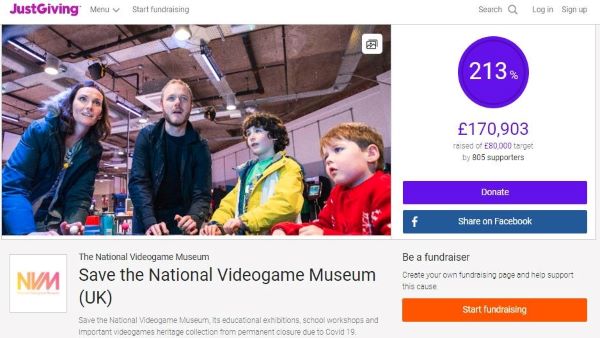 A few weeks ago our lovely Blackbaud colleague Asher sat down with Rick Gibson, CEO of small charity The National Videogame Museum (UK). The NVM launched in Sheffield at the end of 2018 and gained charitable status in the Summer of 2019. They run an interactive museum with nearly a 100 playable games as well as teach people of all ages how to make and play video games through workshops and clubs.

Since opening their doors, the charity has attracted around 40,000 annual visitors, with at least a 1,000 of those being school trips. However, like so many other charities, coronavirus had a huge and almost instant impact on them.

Asher and Rick spoke about challenges, choosing to use JustGiving for an emergency appeal, the appeal’s overwhelming success and what tips he would pass on to other charities. We’ve picked out some of the highlights from their chat for you below.

“Nothing moves as fast as an online appeal.”

After news of COVID-19 hit headlines, The NVM saw their visitor numbers drop by over 50% week-on-week. This led them to make the difficult decision to close their doors three weeks before it was made mandatory by Government guidelines. Prior to closing, the museum had typically generated income through:

With these options no longer available, the charity predicted that they would lose up to 80% of their income during lockdown if they didn’t act quickly. In the space of one week the team created a JustGiving account, launched their first campaign and first ever emergency appeal – the Save the National Videogame Museum (UK) appeal.
When asked why they went this route their CEO shared,

It quickly proved to be the right choice, with them achieving 213% of their £80,000 fundraising target in less than eight weeks.

Hitting over double your fundraising target is an incredible achievement, so Asher asked the questions on everyone’s lips: what worked well and what campaign tips would they share with fellow charities?

How you word and explain your appeal is hugely important. Your Campaign Page may reach people that haven’t come across your cause before, so take a moment to think about your value within the community and how you can convey this in just a few sentences. Try to always write in a punchy, yet clear style.

You want to keep the campaign alive for weeks, maybe months, and The NVM managed to achieve this by using a mix of content. In addition to having longer text on their website and JustGiving Campaign Page, they sent out emails and even created a fundraising video. The full video is one minute 30 seconds, which was then edited into several bite sized videos around 10 seconds long. The shorter videos were then used as engaging social media content.

Reach out to organisations with corporate social responsibility (CSR) policies

Lots of organisations have active CSR policies in place, so they may be able to promote, donate or offer assistance with your campaign. The NVM looked at organisations within the gaming industry, as their messages and interests were closely aligned, and had a really positive response from companies that wanted to step up and help.

“It’s been a massive boost, so heartening, to read the testimonials from people who’ve given us money.”

Asher and Rick spoke for just over 20 minutes, sharing further tips and lessons that The National Videogame Museum has learnt from their emergency appeal. They also discuss why they would continue to use JustGiving and how online fundraising has provided them with supporter insights that will help them to run bigger and better campaigns in the future.

Listen here to the full conversation and gain extra insights for your own digital campaigns.