Fundraising regulation: What you need to know and do 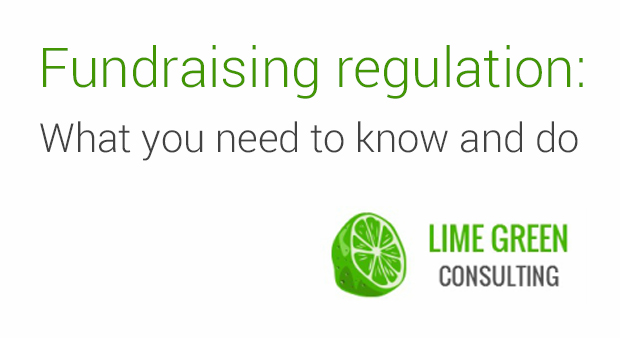 In light of recent developments in the charity sector, we’ve invited Mike Zywina – founder of Lime Green Consulting and Trustee for AbleChildAfrica – to give his opinion on the new fundraising regulator and Fundraising Preference Service, and offer some advice on what charities could do next. Please note that this is not legal advice.

On 4 February 2016, the Small Charities Coalition and the Institute of Fundraising jointly organised a public forum to discuss proposals for the new fundraising regulator and Fundraising Preference Service (FPS).

The forum was a response to criticism that small charities had not been consulted in the development of the new proposals. It was the first public consultation of any kind and the first opportunity for charities to engage directly with Stephen Dunmore, Chief Executive of the new regulator, and George Kidd, the Chair of the Fundraising Preference Service working group.

Big changes are coming and they will affect all charities, large and small. As a fundraising consultant and small charity trustee, I’ve felt the need to keep abreast of developments and air my own views. I’d recommend that you do the same.

I’ve written this blog to help anyone who needs to get up to speed. Below you’ll find links to key documents, a quick summary of the headline news and our recommendations for what to do next.

‘Regulating Fundraising for the Future’ report (a.k.a. ‘The Etherington Report’)

Key issues raised on the day by four break-out groups

The majority of small charities seem to accept and appreciate the need for an overhaul of fundraising regulation, despite querying some of the detail (see documents above). As trustees are generally very involved in their small charity’s fundraising efforts, they weren’t fazed by the suggestion that they should be ultimately responsible for fundraising practice.

Most concern focused on the new Fundraising Preference Service (FPS). Small charities were worried that events largely out of their control would have a big impact on their ability to fundraise, and that organisations with limited administrative capacity and no database would struggle to check supporter details against the FPS list.

Despite some strong criticism, Stephen Dunmore and George Kidd clearly stated that the FPS will be launched. Only the detail is under discussion. Small charities may ultimately be exempted, but it was unclear how this could be done without confusing or angering the public.

The new regulator and the FPS will likely be funded by a levy on all charities spending more than £100,000 per year on fundraising. Depending how this is calculated (whether it includes staff salaries, a share of overheads etc.) some smaller charities may be liable to pay.

Personally, I felt there was a lack of clarity from George Kidd around how the FPS will work in practice. Charities raised many good questions that have clearly not yet been considered and could not be answered on the spot. On the plus side, if these questions now inform how the FPS is developed, the forum will have succeeded in giving small charities real input into the process.

What should you do next?

While small charities may yet be exempted from the FPS, the forthcoming changes could well have a real impact on your charity. You may be forced to pay a levy towards the new regulator, dedicate additional resources to preparing your fundraising campaigns, and face sanctions for inadvertently breaching new rules. Your supporters could sign up to the FPS because of marketing from a different organisation, not realising that they won’t be able to hear from you again.

I would recommend reviewing the key documents and making sure that you’re up to speed now. Even if you can’t take direct action until more details are revealed, you can discuss how to monitor developments, whether you want to have a voice in the consultation process, and how you can stay flexible in order to make any necessary changes later.

Review your fundraising strategy and assess your vulnerability

​Are you over-reliant on individual giving? What would happen if a percentage of your supporter base suddenly became uncontactable tomorrow? Are there any fundraising opportunities open to you that you could start to develop now in order to be less susceptible to the changes? Do your existing trustees have the confidence and knowledge about fundraising to navigate the changes effectively?

Periodically reviewing your fundraising strategy and testing how it would stand up to possible external changes is always important. Doing so now is strongly advisable. Find out more about how I can help you with your strategic planning.

Assess your supporter communication to stay ahead of the curve

It’s easy to kick and scream about the forthcoming regulation changes. However we’re in this position because public trust in charities has plummeted, and not without reason. Now is a good time to evaluate how well you communicate with supporters. Do your staff have everything they need to do this properly? Is there guidance for communicating with vulnerable donors or evaluating potential corporate donations?

If the answer is ‘no’, be proactive and make changes now. If you’re doing this well already, make sure your supporters are aware of it. Media and public scrutiny of charities is likely to keep escalating, so stay ahead of the curve and inspire trust by saying “these are the steps that we’ve voluntarily taken” rather than appearing to only react to enforced changes.

The forum on 4 February was a very positive first step, but charities must keep engaging with the process and keep the pressure up by highlighting which issues and unanswered questions are important to them.

Personally, I think there are still some grey areas that need clearing up. How will the new regulator and the FPS be funded without jeopardising the viability of small charities? Will potential FPS subscribers realise that they may be blocking all future fundraising communication from their local charity, school or hospital? Will the FPS truly remain “a last resort for vulnerable donors” and not an easy button that everyone can press if, for instance, the Daily Mail or the One Show run a feature about it?

I believe that we all have a responsibility to the sector – and also to the public – as well as ourselves. Some of the criticism the industry has received may be justified, and many of the proposed changes are needed. However, it’s sad that the first ever communication preference service targeting a specific industry is aimed at charities. We have a proud tradition of charitable giving in the UK but, if new fundraising regulation goes wrong, we could decimate this. Can you really afford to stay silent?

Keep in touch with the Small Charities Coalition and the Institute of Fundraising to stay abreast of developments and further opportunities to have your say. Contact them to actively voice your support. Share this blog post and spread the word to colleagues and friends.

​Recent events have proved that your voice can make a difference. Please keep using it.

fundraisingFundraising regulation
Mike Zywina is an experienced fundraiser and the founder of Lime Green Consulting, providing affordable consultancy to smaller charities specialising in fundraising strategy, events management and individual giving. He is also a Trustee for AbleChildAfrica. Visit www.limegreenconsulting.co.uk to find out more.
Scroll To Top