Future trends of the almighty email 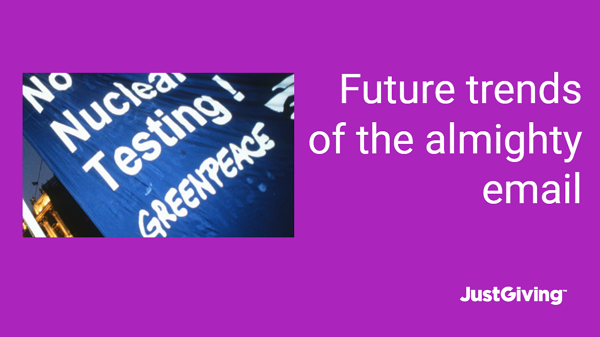 Email has for far too long been the bottom of the pile of our to-do lists. BUT! There are some amazing charities getting super creative with their email marketing, using it to full potential, and they don’t look to be slowing down anytime soon. So here are my future email trends to look out for and to jump on.

We all know personalisation is king when it comes to getting anyone to interact with your emails, and this is something we’re going to be seeing more and more and more of in emails.

One charity that is really making great use of personalisation is the British Heart Foundation.

They have been working with EchoMany and MovableInk to create excellent personalised videos, and real-time content, allowing them to send emails that are perfectly tailored to each individual supporter. They have barometers based on your JustGiving target and raised amount (that changes as your total raised goes up), links to videos with your name and the amount you raised, and interactive polls – which update in real time!

If you’re doing a massive cycle to raise money for a great cause and you get this in your inbox, there’s no way you won’t feel super special. And you’re probably way more likely to take on that massive cycle again, or something equally as tough.

People’s favourite topic is themselves – let’s capitalise on it!

Knowing who’s into you and who isn’t is a good place to start when it comes to segmentation, and Greenpeace are doing a great job of this.

By using data on supporter’s previous actions, they can tell who’s clued up enough, and passionate enough, about specific topics to ask them to take bigger actions.

One example they ran recently was an “email your MP” action around nuclear deals. Heavy stuff right?

They only wanted people who were pretty in the know in the topic to let loose on their MP on behalf of the charity, so they segmented their audience by grouping anyone who’d taken their previous letter-writing action. Of those people, they grouped everyone who had written their own letter instead of using the template version of the letter they Greenpeace provided.

You’ve got to be pretty dedicated to do that!

They also further capitalised on this clued up group of driven supporters by asking them to check out their lobbying network in the thank you email.

Controversial alert – emails can be boring.  But they really don’t have to be. It’s hard when you’ve got the time pressure on and the newsletter needs to go out, but taking a step back and thinking about what you can do that’s a little innovative is going to help keep your emails more fun.

I’ve seen loads of little stokes of genius around this recently.

But my favourite ever, hands down, is the Spotify year round up campaign. (For more of me drooling all over this stellar campaign, check out my blog.)

Earlier this year Google announced that they plan to add AMP functionality to Gmail. This means it will be possible to have real-time updates and interaction with web pages in the email, rather than having to click through to go to a website. You could search through recommended pins, just for you based on your browsing history, in an actual email. You can get rid of pins, and new ones will appear, all in the email.

Or you could open an email from your favourite airline company, and look at real-time flight offers, which you can interact within the email.

I already think email is a brilliant way to engage with supporters, but if AMP in email takes off, there will be no stopping for the electronic mail.

If you want to learn more about emails and keep inspired take a look at, Really Good Emails and Charity Email Gallery.