What charities can learn from grassroots organisations 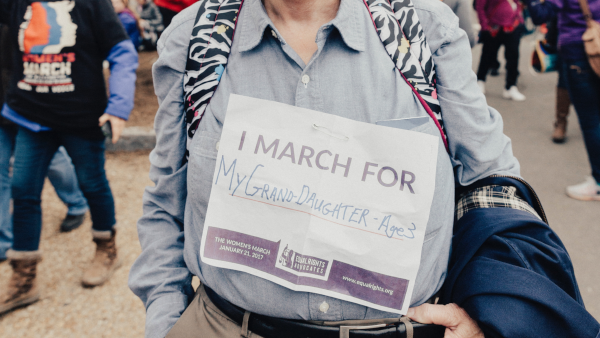 Last week, Pete Buttigieg – the Democratic Mayor of South Bend, Indiana – made a stunning announcement. The relatively unknown candidate’s bid for the presidency was a long shot – but against all odds, he raised over $7 million in two months from a field of regular citizens relatively cold to his cause. With 158,550 individual donors and an average donation of $36, his hat is well and truly in the ring.

Grassroots support has been lighting up the political field since the Obama era and the rise of digital campaigning – but that’s not the only place it’s catching. All over the world, digitally-driven activism is going from strength to strength, with each network better than the one before at using digital platforms to galvanize people into action.

And their work is powerful. March for Our Lives. Bridges not Walls. The People’s Vote. Black Lives Matter, the Women’s March, 350.org, Greenpeace – they’re movements that put power in the hands of people and build massive momentum to inspire change.

When I think about campaigning organisations there’s one word that springs to mind: fearlessness.

Traditional charities can struggle to capitalise on the things that have made activist organisations so successful. Decision-making bottlenecks, lack of funding, preconceptions about giving and participation behaviour, and risk aversion can limit our ability to grow and seize opportunities.

Millions of people all over the UK follow charities on our social media platforms, support, cheer on and participate in challenge events, bake and fundraise in their schools and workplaces. People do want to take action – and we have a responsibility to provide them with ways to do it.

Both types of organisations are hugely different in model and aim, and occupy separate but vital spaces in our fundraising and social engagement ecosystem. But that doesn’t mean traditional charities can’t learn from grassroots successes.

Here are my favourite things I ever learned from being a campaigner.

Turn emotion into a force for change

We know that emotion is a powerful driver for action, but too often, we sort feelings into binaries. Anger: bad. Happiness: good.

But this approach tends to ignore the complexity of the emotions that drive our actions. Someone who is angry about lack of action on climate change can also be deeply motivated by a hope for their own future or a pride in their community and home. Someone who is passionate enough to participate in the Womens’ March might be driven be a deep love for their sisters, mothers or friends.

Organisations that are effective at turning people into supporters are great at tapping into their underlying emotions and figuring out what motivates them – and they’re great at attaching those emotions to asks.

Put power in the hands of people

I don’t believe in the words ‘armchair activism’. So-called slacktivists, armed with laptops, blogs, email lists, and phones, have successfully grown massive movements of people who are willing to take online action into the real world.

In advocacy, we talk about escalation a lot. Someone who signs a petition now can be a donor next week and a volunteer next month. Someone who doesn’t donate might have 10 friends who will. No matter what actions you’ve taken and where you are on the pipeline, you’re an equally valued member of the community.

And that value translates into how you empower and interact with your volunteers. Grassroots groups are excellent at turning volunteers into the neurons of the advocacy brain. They’re not only sign-holders or fundraisers – they’re community organisers and leaders as well, as empowered and trusted as contracted staff.

This isn’t something we see replicated a lot in traditional charities, who tend to silo their supporters into buckets labelled ‘non-donors’ and ‘donors’. But just because someone isn’t capable of making a donation, doesn’t mean they’re not an important part of your community. By devaluing the very real contributions that non-donors can make to your cause, you risk missing opportunities to grow your impact. Some charities have moved towards assigning a tangible value to non-financial contributions – this can help when you’re trying to make a case for campaigning to grow.

Don’t be scared to take a stand

Time and time again, the petitions and hand-raisers that convert the best are the ones where the issue is contentious or politicised.

Grassroots organisations aren’t scared of tackling controversial or political content – they know that these are the ones that generate the most chat. They position themselves as leading voices, create spaces for people to act or speak on causes they feel strongly about, and in doing so elevate their visibility.

Don’t be scared of negative feedback – but do be aware of communications risks, and do be discerning about what is legitimate negative feedback and what isn’t. Too often, charities conflate the two, and in doing so can shut off legitimate avenues to growth. Negative feedback is a normal part of the social media ecosystem, so lean into it and use it as an opportunity for growth and conversation.

Activist organisations have reactiveness build into their DNA. Many have sprung up as a direct response to public incidents or political barriers. That means they’re very good at spotting relevant opportunities and reacting quickly to them – and they’re also very good at communicating the sense of urgency required to motivate people to take action.

Charities are great at keeping abreast of relevant news – but that needs to be coupled with a robust system for rolling out rapid-response actions. Reactive petitions, appeals, and sharing campaigns are all ways to give your supporters a voice on the issues cropping up in the news.

Your team should be ready to spring into action as soon as something happens. The tools, templates and strategies should already be primed for your use, but more importantly, you should have already identified who is responsible for producing and signing off on content. Have a plan for what ads you’re going to put out, what content you’re going to push out to your supporters, and what strategies you’re going to use to amplify your message.

Most campaign organisations have a rock-solid onboarding journey, and it doesn’t vary a huge amount across organisations. If you’ve ever signed a petition online, you might be familiar with it already. It looks like this:

Instead of spreading the asks out, where they might lose people across channels and time, campaigning organisations follow one ask immediately with another – often on the same channel, with no off-site navigation – and in doing so, they connect the ask firmly to its impact.

They know that the emotions and motivations that drive people to act are the same that drive them to donate. If someone’s just signed a petition, chances are they’re riding an emotional high – so why wait til later to ask for a donation?

In a previous peer-to-peer fundraising challenge, we set up a Facebook group and invited all our campaign participants. They used the space to share stories, successes and campaign plans. During the week of the campaign, they egged each other on and donated to each other in encouragement.

People who feel like they are part of a community are more likely to fundraise, to volunteer, to participate. But you can’t just build a community through communication – no amount of hashtags or ‘family’ themed copy is going to make people connect with each other. You need to create those spaces for them, and you need to moderate it for them.

What lessons are you choosing to take with you into your own charities? Let us know in the comments!