How to incentivise your social media shares to drive donations

Michael Vlassopoulos is a senior lecturer in economics at the University of Southampton. He’s been conducting research to evaluate incentive mechanisms for generating social media shares. He shares his results with us along with some quick wins that your charity can implement.

What did we do?

We investigated methods of encouraging social media sharing among donors through an online field experiment. We set up a website to promote a fundraising drive for oesophageal cancer research in partnership with Cancer Research UK.

In addition, people were encouraged to make their own donation to the drive after they had signed up.

We used this fundraising platform to test the performance of various referral mechanisms, which encouraged visitors who chose to ‘donate a click’ to spread the word about the cause on Facebook, Twitter and via email. The mechanisms differed in the way they rewarded sign-ups resulting from a user’s social media post.

How did we test different incentives?

One group of visitors was offered a certain number of points for referring a friend, and we varied the number of reward points associated with each referral. 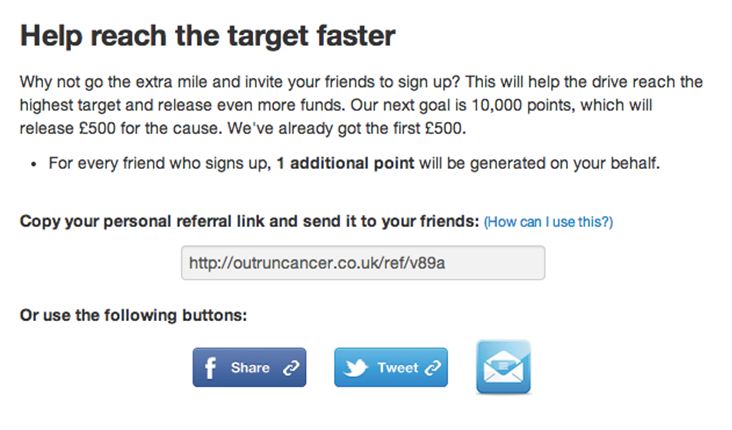 Another group was offered points for direct as well as indirect referrals (where referred contacts refer others). 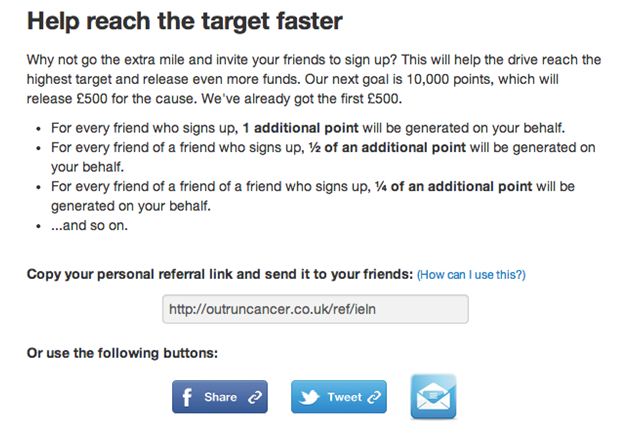 What were the results?

We found that the group of users that was offered the highest number of points for directly referring other users, shared more on social media and generated more new sign-ups for the campaign.

Find out a little more about the research in our video:

What does this mean for your charity?

Our results indicate that charities can easily and with little cost increase their visibility, and potentially their donor base, by introducing simple rewards in their campaigns to encourage their existing donors to share information about their cause on social media.

Here’s some quick wins for your charity:

Online donor engagement is still a new topic and further research is needed to understand its full potential for charities.

Our research group plans to investigate additional schemes of engaging donors through referrals, applying gamification methodologies that are becoming increasingly popular and proving successful in other sectors. This means employing a variety of functions in fundraising campaigns, such as, badges, contests, leaderboards, and (symbolic) prizes to encourage users to refer their friends.

If your charity would like to know more about how insights from our crowdfunding research could be applied to your fundraising activities, please contact us.

behaviourdataFacebookincentivesresearchTwitter
Michael's research area is applied microeconomics with particular interest in behavioral, public and labour economics. His recent work has focused on the sources and implications of prosocial behaviour and the effectiveness of referral incentives in crowdfunding.
Scroll To Top