How I use Twitter in the fight against HIV 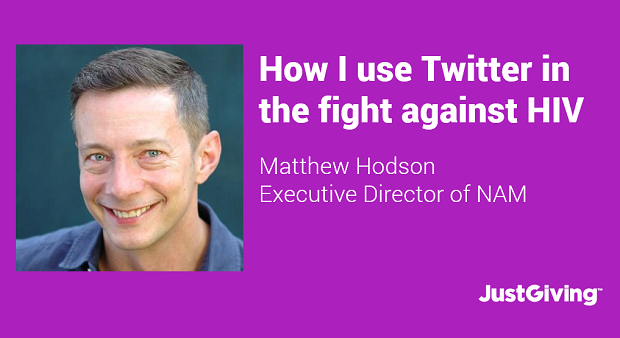 Matthew Hodson is Executive Director of NAM aidsmap and the overall winner of the Social CEO Awards 2017. NAM aidsmap provides HIV news and treatment information to support people living with HIV, throughout the UK and internationally, to live longer and healthier lives. www.aidsmap.com. Follow him on Twitter at @Matthew_Hodson.

‘Ignorance = fear; silence = death’ proclaimed the poster from the radical AIDS activist group, Act Up. The image was burned into my mind, as a young gay man, recently diagnosed with HIV.

I got involved in HIV charity work in 1999 because I wanted to dispel the ignorance and to end the silence that had resulted in the deaths of so many that I loved. I wanted to share intelligence, to empower people through knowledge.

In 2017, social media is a vital tool in that mission.

This year, there has been plenty of good news that I’ve used social media to amplify:

When a colleague at GMFA (Gay Men Fighting AIDS) first urged me to go on Twitter, I was unconvinced. “How can I say anything significant in 140 characters?”, I wondered.

Now I know it can make a difference. Since then, Twitter has allowed me to:

On this day in 1991 the world lost Freddie Mercury to AIDS. This #WorldAIDSDay we should celebrate the progress we have made in treating & preventing HIV as we recall those we miss.#RememberThemhttps://t.co/TnGbkrTu3L pic.twitter.com/4XZEsTzVWE

If we’re going to play this game, can we add the word ‘straight’ to every headline which reports a crime committed by a heterosexual? pic.twitter.com/FyoWKevADR

Thanks for all the birthday wishes.
When I was diagnosed w/ #HIV, almost 20 years ago, my hope was to live to 50. Job done.
Treatment works. pic.twitter.com/R9AK8z2yBX

Black and other minority ethnic groups are not seeing the same reduction in diagnoses to the same extent.

Late diagnoses, and the increased likelihood of illness that is associated with it, remains too high among all groups.

The stigmatisation of HIV, often based on outdated or inaccurate understanding of the virus, impacts on the emotional health of those of us living with it.

This year has seen astonishing progress in our efforts to prevent new cases of HIV but this is not the time for us to falter or hesitate in the fight against AIDS – this is the time for us to conquer it.
My #WorldAIDSDay blog. https://t.co/TnGbkrTu3L

What we need to do

Twitter and other social media platforms don’t always create an environment for better understanding between people. Media can be manipulated, platforms can be used to promulgate hatred or distort the truth.

But Pandora’s box is open. I don’t see that disengaging from it can help.

It was combination treatment that managed to disable the virus enough so that HIV became a liveable condition. It was a combination approach to prevention that finally delivered a decline in HIV diagnoses.

Similarly, we need a combination approach to our communications that takes full advantage of the accessibility and shareability of social media, amplifies our voice and our impact.

End the ignorance. End the silence. Act Up. Fight AIDS.

campaignsocial mediaTwitter
Matthew Hodson is Executive Director of NAM aidsmap and the overall winner of the Social CEO Awards 2017. NAM aidsmap provides HIV news and treatment information to support people living with HIV, throughout the UK and internationally, to live longer and healthier lives. www.aidsmap.com. Follow him on Twitter at @Matthew_Hodson.
Scroll To Top