How reward and recognition schemes can motivate your fundraisers

We all know that when running a fundraising campaign, a sign up doesn’t always equal an active fundraiser. So, how can you get your supporter over the line and collecting donations?

It’s no longer enough to rely on the inherent good feeling that the act of fundraising can cause. Instead more charities are proactively trialling reward and recognition schemes. The schemes work by communicating a specific ask, and if the person fulfils the ask within the set-out time frame they will be entered into a prize draw or sent a tangible reward. The desired outcome is that people will feel both appreciated and motivated to increase their involvement in the charity’s campaigns.

We caught up with the events teams at the British Heart Foundation and Great Ormond Street Hospital Children’s Charity, who have both used reward and recognition to increase their number of active fundraisers for sporting challenges. They’ve shared their experiences below of how they approached a direct ask, the types of incentives that they used and how their fundraisers responded.

“The London to Brighton Bike Ride is our flagship, award-winning event. In 2018, it sold out for the first time in five years with 16,000 riders raising £3.1 million. We knew that we wanted to keep momentum and make our 2019 ride just as successful.

We wanted to encourage participation, so as part of our email strategy we decided to run a competition alongside a countdown to create a sense of urgency for fundraisers to set up their Fundraising Page on JustGiving. Our incentives for the competition were our existing merchandise. This was an obvious choice as it wouldn’t cost us anything else and it was easy for us to source and send out.

We sent out two competition emails, one to those who had set up a Fundraising Page but hadn’t yet started collecting donations. Our ask to this group was to fundraise £50 over 5 days. The second email was to those without a Fundraising Page, we asked them to set up a page within 24 hours and receive a first donation. 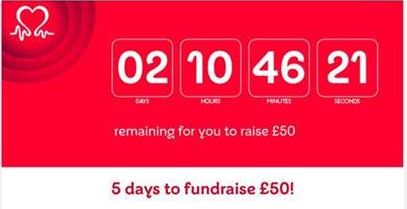 We managed to raise just over £14,500 through using the incentivised emails. The five day challenge proved to be the more successful campaign, resulting in people raising an average of at least 75% of their overall fundraising target. We did run other email campaigns, but we believe that reward and recognition emails helped us to see an increase in both donations and interaction with our riders.”

“At GOSH Charity we use incentives for a number of reasons, from driving event registrations to boosting average remittance and encouraging people to reach their fundraising targets sooner. We’re very fortunate in that all of our incentive prizes are kindly donated to the charity.

As you’d expect, success often hinges on the nature or value of the prize, relevance to the event and the barrier to entry for the supporter. For example, we’ve previously trialled incentivising supporters to exceed their minimum fundraising commitment with small prizes (i.e. branded water bottles and gels). One occasion where we did this was a past London marathon. Due to the large number of participants, we asked that they notify us once they had exceeded their target. This added an extra action and resulted in fewer people claiming their prize.

Another way we’ve found value in incentives is where they are multi-purpose. For example, for Richmond Running Festival this year we’re using an incentive with two objectives; firstly, recruiting own place runners and second, converting them to fundraising. We’re doing this by offering any own-place runners who (1) register their place with Team GOSH and (2) start fundraising (any amount qualifies) automatic entry into a prize draw to win a Tom Tom Runner Cardio watch and signed Gordon Ramsay cookbook. This incentive is still live, but we have already exceeded our own-place runner recruitment target so it’s looking effective for driving our registrations.

All in all, we’d recommend utilising incentives for recruitment and/or fundraising purposes and will continue to do so ourselves. We’ve found most success where the prize is of high value, is relevant to the event and the competition is easy to enter for the supporter.”

Reward schemes work for all budgets

Running a reward and recognition scheme doesn’t have to drain your budget. GOSH Charity and BHF both demonstrate that you can engage your fundraisers by making it clear what action you want them to take and tailor your incentives to the audience and/or the specific fundraising event.

Has your charity used reward and recognition? If so, then what were the key learnings? Tweet us @JGCauses.