How Snapchat is helping charities to reach younger audiences 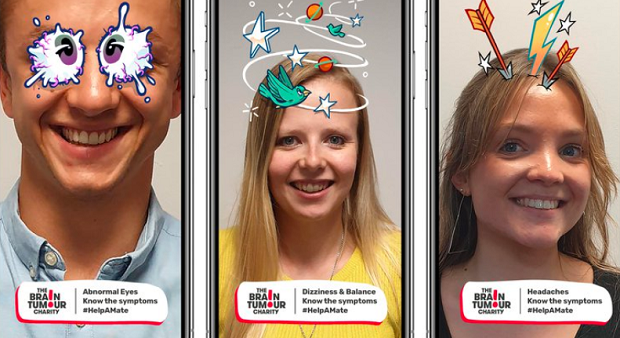 Earlier this year, Blackbaud’s Status of UK Fundraising revealed that despite 94% of charities using social media as a key engagement tool, only 3% actively posted on Snapchat. Given that the channel has been readily available since 2011 and currently has around 14 million users in the UK alone, could charities be missing out by excluding Snapchat from their digital strategies?

Snapchat is a multi-media app that centres around sending ‘snaps’, pictures or short videos, to friends and networks. Check out this beginners’ guide to SnapChat from HootSuite. Snaps have a limited viewing timeframe of only 24 hours, so users have the option of adding filters, text and animations to make their images as eye catching as possible.

The Brain Tumour Charity decided to trial a new campaign that would highlight the symptoms of brain tumours in children and teenagers, whilst also driving awareness of their Headsmart initiative. Despite not having extensively used it before, they chose Snapchat because of the platform’s high number of teenage users. Plus, the site offered regular data insights allowing the charity to tweak and optimise the campaign whilst it was still running.

“This is the first campaign we have run to target teenagers via a social media platform. We wanted to test a new way to reach a very public audience at scale and attempting to cut through with a serious message in a very social space.”

The campaign used quirky ‘fail’ videos, which linked to a symptoms landing page, and offered exclusively designed filters which each reflected one of the four key symptoms of a brain tumour: vomiting, dizziness, abnormal eye movement and persistent headaches. It ran throughout the month of September to coincide with both childhood cancer awareness month and back to school time, with hopes that the filters would start a conversation amongst teenagers when reunited after the Summer holidays.

Overall, using Snapchat proved to be a great way for The Brain Tumour Charity to reach a younger audience. Their filters were shared over 19,000 times, the fail videos were opened over 250,000 times and they saw over 4,000 users visit their symptoms landing page. Sarah Lindsell, Chief Executive Officer of The Brain Tumour Charity, said: “We hope that this Snapchat campaign helped young people to better recognise the signs of a brain tumour and encourage them to see a GP if they are experiencing any of the symptoms persistently. As the UK’s foremost brain tumour charity, we are leading the way in fighting this disease on all fronts through our work.”

Could your charity benefit from using Snapchat?

The short answer? Yes. You may think that The Brain Tumour Charity had a specific reason to target a younger audience, and that your charity doesn’t. However, gen z and millennials have been found to be the most charitable demographics, accounting for nearly a third of all giving. If you don’t actively include them in your communications then you run the risk of missing out on future donations and valuable relationships. With so many younger users, and 39% of gen z and millennials saying social is their preferred source of information, Snapchat may be the ideal platform to help you future proof your charity.

If you want to take a closer look at the behaviour and preferences of younger donor demographics, then you’ll find a variety of insights in Blackbaud’s free report ‘The Next Generation of UK Giving. Click here to read the full online report for free.