How Stonewall is tackling GDPR with sophistication

The EU General Data Protection Regulation (GDPR) is “the most important data protection regulation in 20 years.” You can be fined a massive 4% of your annual turnover for breaching the new rules, which come into force on May 25th 2018.

Many charities are taking GDPR as an opportunity to clear out their contact lists completely and start all over again. They’re asking everyone they’re in touch with to refresh their consent to be contacted.

It’s a big, official task, but that doesn’t mean it has to be boring.

On Valentine’s Day, London-based charity Stonewall, an organisation working for inclusivness and equality for LGBT people, sent out an ingenious GDPR email dressed up as a romantic note that asked followers not to leave them. 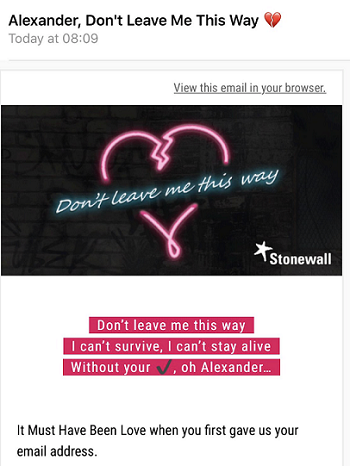 Ben Kremer, Senior Email Marketing Officer at Stonewall said the idea behind the campaign came from a discussion around sending the email in the middle of February.

“We realised that we could send it on Valentine’s Day. The initial idea was for it to be really desperate and needy. It was going to be super pink, with a kind of secondary school, ‘please don’t leave me’, desperate feel.

“We had a draft, but we realised it was too much. During that process we realised that we could play around with song lyrics. When we asked people internally they really liked the idea, so that was what we went with in the end.” 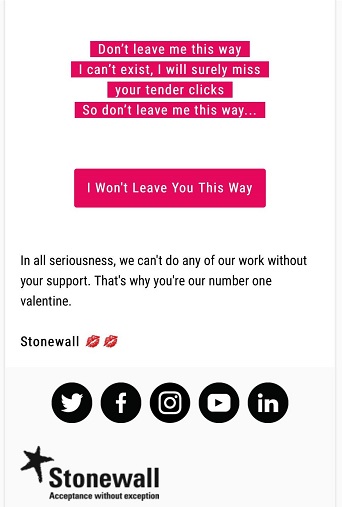 The campaign was very well received. Stonewall were applauded by fundraisers and charity supporters online

“People seem to really like it. They’ve been bombarded with dull and angry GDPR stuff. You can really cut through the noise with comms like this. We went through loads of GDPR comms to see what other organisations had sent out. There is nothing wrong with trying to make it more interesting.

“We need people’s support, but if we can make them smile as well, that is definitely something we should be trying to do.”

Creativity is the key

Ben says the response has inspired the team to be more creative with their communications, though he admits that the time needed to plan these campaigns is sometimes just not there.

“Capacity wise, sometimes the time just is not there. We definitely see an increase in engagement when we are creative, though. For Halloween we created some posts that said ‘Some people have two mummies’ and they went viral. Whenever we do get the chance to do something a little bit more creative we get a much better response.”

The email was phase one in a series of Stonewall communications for different audiences. They’ll be sending further comms to last givers and consistent donors. 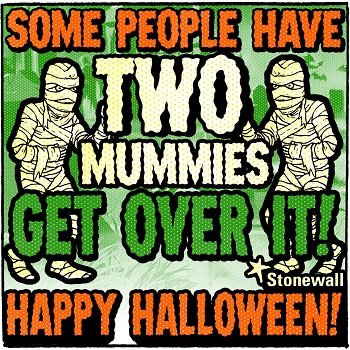 Seeing GDPR as a positive

Though the new rules around GDPR have certainly caused an increase in workload for people at Stonewall, Ben says he thinks they are a good thing. It presents an opportunity for transparency.

“It can be tricky to navigate the different needs from different teams. We need to please supporters and the internal teams, but overall I am happy about the idea of GDPR.

“As a data owner myself I think the idea that things are going to be more regulated and clearer is really good. By May 25th we will have really clear, clean lists of people to contact. That is an exciting place to be in.”

Plan ahead for the GDPR

To help you get ready for the GDPR, JustGiving has put together the following tools and resources: