Jessica’s Promise – How the best campaigns are fundraiser stories 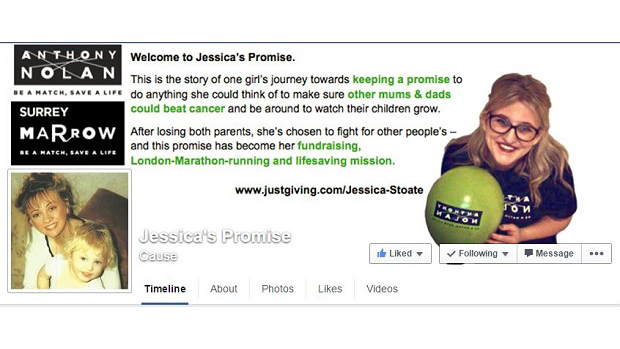 Meet Jessica Stoate. Jessica is running the 2015 London Marathon, like tens of thousands of other people. She’s running for Anthony Nolan, like hundreds of others. But Jessica’s campaign is different, and I wanted to highlight exactly what she’s doing so well in this blog.

“The last time I ran anywhere was for the bus when I was 14. I missed it”

Before you read this post, watch this video of Jessica running a half marathon, a big step in her full marathon training, and one that tells her whole story.

During the half marathon route, she comes across a bench where she once sat with her mum on their way to a wedding. Her mum was very poorly at the time, and she knew that neither she nor her dad would be there on her own wedding day. It was then that she made a promise that she would never sit back and allow cancer to take that away for somebody else.

This story is a real tear-jerker, and so much more besides. Jessica is the dream charity fundraiser in 2015, for lots of reasons.

One of the things that made the #nomakeupselfie campaign and ALS Ice Bucket Challenge so wildly successful was their grassroots nature. They weren’t meticulously planned in charity boardrooms, but spontaneously started by normal people like Jessica. That gives them an authenticity that would ordinarily be out of reach.

Jessica’s campaign is a prime example of that authenticity. The video has no storyboarding and no sign off. She just picked up her mobile phone, filmed herself raising money, and went for it.

And it is emphatically not an Anthony Nolan video – this is a Jessica video. We have always related to individuals over organisations, one face over many. Ever since the internet has allowed normal people to tell compelling stories in their own way, we’ve been able to relate to the beneficiaries and supporters of charities rather than to the charities themselves.

Jessica picked her phone up and actually held it vertically while filming, leading to those massive black bars at the side of the screen when it was uploaded to YouTube. It’s basic error that produces a lower quality viewing experience, and it’s a mistake that a professional charity would never have made. And yet it’s completely irrelevant in practice – the content is so funny, moving and compelling that the DIY look of the film doesn’t matter one bit.

It’s also a very long video. Five minutes might as well be 100 hours long in online terms. That said, it’s broken up with well thought out text breakaways and it (quite literally) takes the viewer on a continuously moving journey.

Her use of social media is great

Jessica hasn’t just set up a JustGiving page where you can see how close she is to her £5,000 target (over 85% already), she also has a dedicated Facebook page.

There are pictures of blossom trees from her training runs, regular heartfelt thanks to her donors and even images of her collapsing on her driveway after particularly challenging runs. It’s funny, it’s warm, it takes her supporters with her on the emotional rollercoaster. She’s used digital tools to great effect to support her fundraising.

So this is me, collapsing on the driveway after an 8 mile run. The actual marathon is more than three times this amount, but no biggie everyone – I’ve clearly got this.

Jessica tells us why we should care

This isn’t just yet another sponsored run – this is the fulfilment of a promise Jessica made to her mum. A promise that she intends to keep, regardless of what her body told her she could do.

A beautiful and unique sentiment. And a story so compelling that the Mail Online has picked it up, proving the secret to huge coverage is emotion-packed stories like Jess’s.

We suffer with Jessica

Jessica is clearly suffering. She doesn’t look like she’s joking when she says she hasn’t run since she ran for a bus aged 14, and I believe her when she said she missed it. It’s easy to feel empathy. And a campaign that evokes real emotion is destined for success.

A huge well done to Jessica for running such a brilliant campaign, and an even bigger good luck for when you’re running the London marathon!