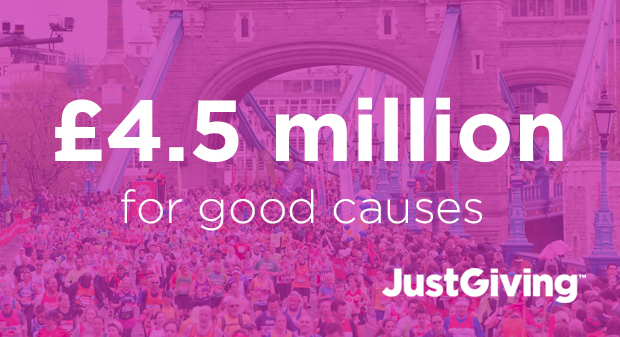 The build-up to London marathon is always a busy and exciting time at JustGiving, and this year has been no exception. Here’s a round-up of our key stats from the last seven days:

Last week, during our busiest week of the year, we broke a new record for the all-time, largest number of people on the JustGiving website at once, with over 16,000 people visiting us at 10pm on 19 April! Most had been inspired to come to JustGiving by the personal fundraising appeal set up for 17-year-old British F4 driver, Billy Monger, after he was involved in a high-speed crash at Donnington Park Race Circuit last weekend. Over 11,000 people have contributed to the appeal and at one stage this one page alone had over 9,000 people visiting it. This beats all previous viral JustGiving pages.

2) £4m+ given over marathon weekend

On Saturday and Sunday, we saw peaks of three donations per second and over £4.5m donated to good causes on JustGiving. £2.3m alone was given to London marathon fundraisers – an 11% increase on last year.

On marathon day thousands of people took to the streets to cheer on family and friends taking part in the London marathon, so it’s no surprise that they turned to the device in their pockets to give. On Sunday over 88% of people visited JustGiving on their mobile phone or tablet – up from 80% last year.

Well done to all your runners that took part in the marathon yesterday – they’re amazing and why we do what we do! To help them celebrate and to raise even more money, we’ve created a fun way for you to share their marathon fundraising. It’s called Vests of the Best and brings together all the stories behind the vest of your runners. Enjoy!

justgiving innovationLondon marathonmobile givingViral giving
Sally Falvey has worked in online fundraising for over 10 years, and is the Head of B2B Marketing at JustGiving. She’s passionate about helping all charities use the latest technology to be more efficient and raise more money.
Scroll To Top