The goal of A Million Miracles is to raise €36 million over a three-year period in order to fund one million cataract operations in developing countries. Teresa Murray, PR and events coordinator at Sightsavers Ireland, shares how they launched this international campaign.

We wanted to create a storytelling experience that would unfold over multiple channels and speak to an international audience.

The campaign needed to show the urgency of reality and the immediacy of now. Most importantly, it needed to make a direct and transparent connection between our donors and the people who directly benefit from their generosity.

So how did we do it?

Our ambition dared us to innovate: we would broadcast the first ever live cataract surgery and on the next day – World Sight Day- we would live broadcast the patient’s bandage being removed and the moment their sight was restored.

This broadcast would be the focal point for real time donor events in New York and Dublin, as well as an evening event in London.

Fieldcraft Studios designed and implemented the #SeeTheMiracle storytelling campaign. Working from our country office in Malawi, with health worker Madalitso Nyangulu and surgeon Dr. Gerald Msukwa, Fieldcraft found the star of our event: Winesi March, pictured below having an eye test. Winesi is a grandfather who had lost his sight over a twelve-year period, and had been blind for the last two years.

An incredible amount of photography, film and broadcast kit was needed to collect photos and videos ahead of the broadcasts, and also to stream the videos live across the internet. Considerable time also went into setting up and testing all the equipment – including scaling the hospital roof to test the satellite needed to transmit the broadcasts.

The first day’s broadcast, on Wednesday 8th October, came live from the operating theatre, where YouTuber Doug Armstrong talked the audience through the seven minute live cataract surgery, taking questions via the Google + Hangout and other social media as pictured below. The live broadcast was a huge success, generating massive online engagement. 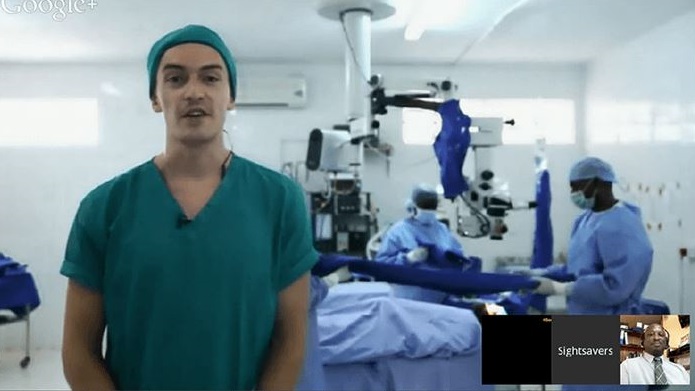 In Ireland we had secured a pop-up space, where we set up a public screening of the live cataract operation. This provided us with a live test of our much less specialised equipment, in advance of our launch event the next day. We were confident that everything was good to go for the October 9th reveal.

Have a contingency plan

On World Sight Day 2014, our team in the field was packed into a small, hot hospital ward where Winesi waited patiently to have his bandage removed following the operation. Moving all the kit from the operating theatre and re-setting up in the ward had taken all morning. An hour before the broadcast, everything had been tested and all looked good in Malawi.

In the USA and Ireland, we were underway with our real time events – welcoming funders and major donors, press and VIPs, to breakfast in New York or lunch at Fire Restaurant in Dublin. There was a live Twitter stream of the #SeeTheMiracle conversations, both commenting on the operation and anticipating the reveal.

Then, 30 minutes before air time, a power cut at the hospital in Malawi tripped all the electrical equipment. No amount of work could fix it. There would be no live broadcast. We would not be able to share, in real time, that miraculous moment of sight restored.

But Winesi had waited long enough

We would not delay this moment for him and his family so we decided to film his bandage being removed and share that with online audiences later in the evening.

Our New York and Dublin guests and our online audiences did not get to witness the reveal, but instead witnessed a reality faced by many hospitals in developing countries: unpredictable power cuts. That power cut was just as likely to have happened in the middle of Winesi’s surgery the previous day.

Many of our supporters expressed a new level of commitment to Sightsavers from the experience. The launch event received more traction in print news because it didn’t go ‘as advertised’. The live reality of the story remained its greatest strength, even when the ending didn’t go as we’d planned.

The campaign had many celebrity quotes and tweets, including Stephen Fry, and much blogger engagement throughout the campaign.

In the week of the broadcasts alone, the appeal raised around €20,000. To date, over 380,000 cataract operations have been funded – each one a miracle to the person whose sight is restored. We are well on our way to our goal of A Million Miracles.

This project is an example of what can be achieved with great international and interdepartmental team work at Sightsavers, and also shows the exponential benefit of working well with a creative agency and their networks.

event fundraisinglive campaignPRstorytellingvideo
From The Rocky Horror Show to Riverdance via Beckett, Teresa Murray’s background in the Arts led her from customer service through production to PR and Marketing, where her natural way with words and genuine enthusiasm for communication, combined with an insatiable appetite for innovation, made the embrace of digital platforms an inevitable and organic occurrence. Sightsavers permits her to exercise her full skillset, as she manages events in both the real world and online, as well as working as part of an international team
Scroll To Top