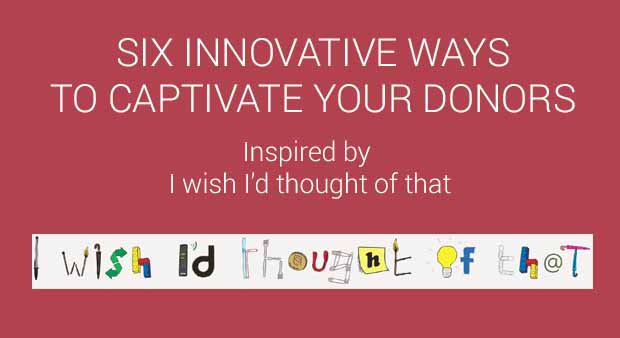 I recently attended I Wish I’d Thought of That, an annual event where 18 fundraising experts share the innovative fundraising idea they wish they’d had in a seven-minute presentation.

Coming in the wake of intense media scrutiny about fundraising practice and low public trust in charities, this was a fascinating time to hear people’s views on the methods that the sector has got right.

One theme kept emerging – the importance of connecting donors to the cause and making them feel great about the difference they make. I felt that this was a powerful antidote to the invasive, pressurising fundraising methods that we’ve all seen publicly exposed and criticised lately.

While not all of the ideas presented at IWITOT would be feasible for smaller charities, we can all learn something from the philosophy behind them. Here are my six take-away ideas for inspiring and captivating your donors, which conveniently (and with a little help from a thesaurus) all begin with I…

Alexandra Aggidis used the Jack Draws Anything campaign to show the value of creating individual experiences for donors. Jack, whose little brothers had spent time in the Royal Hospital for Sick Children, wanted to help raise money for other children in need. He offered to personally draw a unique picture for every donor. He set out to raise £100 but, 536 drawings later, had raised an astonishing £64,700.

This was a campaign with a difference, based on a touching story with a healthy dose of nostalgia. In today’s world of technology and mass fundraising, Jack offered donors a simple and incredibly personal experience. Using some rough calculations about the cost of paper and felt tip pens, Alexandra estimated that the return on investment was an eye-watering 732 to 1!

RNLI’s brilliant Lifeboat Launch Alerts connect donors to the lifeboat launch pager system, so they can receive live updates about when boats are launched on life-saving missions. Donors can control which stations they follow, how many updates they receive and what times of day (or night) they receive them. Each message costs 25p, ensuring an ongoing fundraising stream for the RNLI.

As Louise Parkes explained, RNLI have found a low-cost, transparent way to connect donors closely to the work their support has enabled in real time. They trust their donors with sensitive, live information. We always talk about the importance of storytelling and keeping donors updated, but Lifeboat Launch Alerts is an unusually strong and effective example of doing it.

Drawing on the recent media scrutiny of fundraising, Georgia Bridgwood said that, for too long, we have been treating donors as targets and cash-cows, rather than stakeholders who are central to our plans and solutions. The Donate Locate app, launched by homeless charity The Connection at St Martins, changes that.

When you see a homeless person, you can use the app to make a donation and send the charity their location. You’re now an outreach worker as well as a donor, playing an active role in helping the charity to find out where homeless people are and send help. Many passers-by see homeless people and want to help, but have doubts about their authenticity and where the money will go. One moment of hesitation is enough to make you walk on by. Donate Locate removes that hesitation and empowers donors to make a real difference.

When we think about airports, we tend to imagine the rush of getting to our gate or the deflating feeling of arriving home to rainy Britain. Not the greatest place for fundraising, right? Sandy Luther argued otherwise, showcasing the ingenious Social Swipe.

Interactive digital billboards in airports asked people to donate €2 by credit card, using images like a loaf of bread and a pair of tied hands to highlight problems like hunger and unfair imprisonment. Donors swiped their credit card through the middle of the image, with graphics showing the bread being sliced, or the hands being untied.

70% of people say they would donate more if they knew how their money was directly helping. Social Swipe uses complicated technology to create a very simple message about the power of donating. Instant gratification also has a great follow-up – when donors saw their credit card statement, the standard payment details had been replaced with a message asking them to consider a regular donation.

People may be willing to donate their time as well as money, but only if they feel they can really make a difference. Ben Swart talked about the Help the Oma campaign by German charity Diakonie, which used actresses to play the role of ‘grannies’ (‘oma’ means ‘granny’ in German) who got themselves into compromising positions. When passers-by stepped in to help, they were given a flyer saying ‘You’re exactly what I’m looking for’.

The campaign made everybody feel like they could make a difference. It played on that rewarding feeling that we all get when we do a good deed, which often inspires us to want to do more. Diakonie not only managed to quadruple their number of volunteers, they also made the national press and produced this hilarious video.
​
Institutionalisation (!)

Stephanie Drummond started her presentation by declaring herself a nightmare for charities. Like many young people, she rarely carries much cash, doesn’t often check emails and periodically changes her contact details. So how do you reach the unreachable donor?

Thanks to Penny for London, Stephanie gives to charities almost every day. Penny for London allows donors to donate as little as 1p every time they use their contactless debit cards at participating retailers, including Transport for London. It’s convenient, affordable for all and establishes the habit of frequent giving. At a time when so many fundraising campaigns disrupt our daily routine and require us to actively do something, Penny for London institutionalises donating as a regular, easy part of our daily routines.

And that’s it! Six innovative new ways to capture the attention of your potential donors, and ask for their support in new and unusual ways. Which ideas will you be trying? Or have these six stories inspired you to come up with something of your own? Let us know in the comments below…

Five Ways Your Charity Can Grow Your Funds

Statistic round up: contactless payments

Why music matters: choosing the right audio for Instagram Reels

The Industry Leaders You NEED To Follow And Why

charitydonorsiwitot
Mike Zywina is an experienced fundraiser and the founder of Lime Green Consulting, providing affordable consultancy to smaller charities specialising in fundraising strategy, events management and individual giving. He is also a Trustee for AbleChildAfrica. Visit www.limegreenconsulting.co.uk to find out more.
Scroll To Top