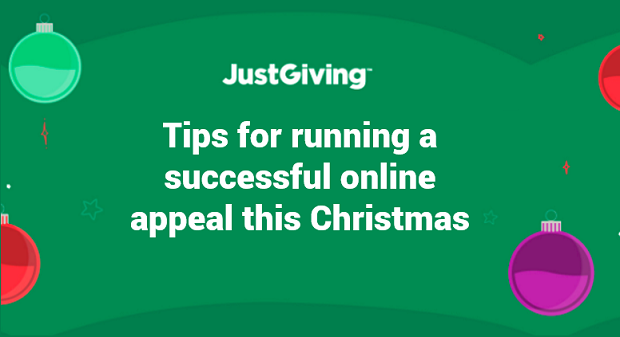 Christmas is coming. In just 90 days. And because we know some of the most successful fundraisers on JustGiving start fundraising online over 100 days before their event, here’s some expert tips to help your charity run its most successful Christmas appeal to date.

Did we mention it’s not too early to be thinking about Christmas? Get started by launching your online christmas campaign on JustGiving and make a plan for where you can promote it, for example, sending out emails to supporters and scheduling Facebook and Twitter posts.

Consider piggy-backing on events such as #GivingTuesday (28th November) and dates in the calendar when you might be able to catch people’s attention, for example, on the last three days of the year there’s an annual spike in traffic on the web and social media between the post-Christmas and pre-New Year’s Day lull. Could you launch an online campaign to grab people’s attention? 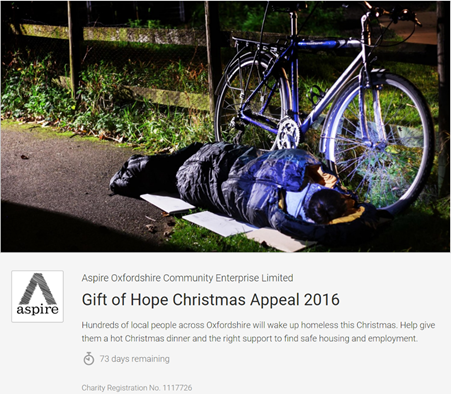 Aspire Oxford, who raised over £16,000 last Christmas to provide hot Christmas dinners to homeless people in Oxford, used a powerful combination of social media and local press to drive awareness of their campaign. This exposure coupled with a strong, emotive message made their Campaign Page a success.

2. Know your audience and catch their attention

Christmas is a busy time of year and social media can be a crowded place.

You know your supporters and beneficiaries better than anyone, so make sure you catch their attention with content and messages that you know will resonate with them. Do you have case studies from your work throughout the year, an eye-catching photo or a testimonial of the work you’ve done? Add this emotive content to your campaign page to draw people in.

3. Have a clear ask and demonstrate the potential impact

You should also decide what your Christmas Campaign page is for – is it a specific appeal or will the money raised help fund work in 2018? Get your message clear and you can make a distinct call to action that your network will respond to. 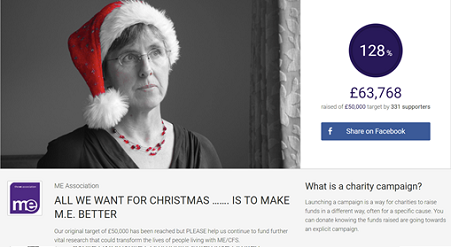 Last year ME Association raised £63,000 with their Christmas campaign on JustGiving. They used a simple ask, an eye-catching slogan and their cover photo had a striking twist on a classic seasonal image.

By creating a Campaign Page on JustGiving, you’re saving your donors’ time by presenting them with a quick and easy-to-use process for pledging cash.

But there are a few more things you can do to help.

Always include a link to your Christmas Campaign Page in any posts you make in the run-up to the festive break (we’ve optimised the pages so they’re ideal to share to Facebook and Twitter).

Where possible, always feature a Donate button; in your newsletters, in your email signature, on your website.

This article on the power of thank you is a good read and a reminder of the difference it can make to how people feel and act.

With our thanking messenger and new reporting tools, it’s easy to thank those who donate to your Christmas Campaign Page and you’ll be more likely to turn them from one-off donors into lifelong supporters!

Holly Hedge Animal Sanctuary made sure it thanked every donor to their Campaign and used Facebook and Twitter to keep in touch with as many donors to the Campaign Page as possible. They believe that by nurturing this relationship at Christmas they boosted donations into the New Year. 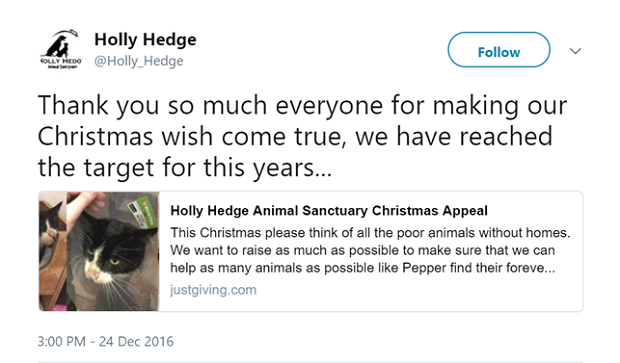 6. Become our Christmas Campaign of 2017

All you need to do is create a Campaign Page on JustGiving for your Christmas appeal, promote it on your charity’s social media channels using the hashtag #jgchristmas and submit it to us by 30th November 2017.

The winning campaign will be chosen by a panel of judges here at JustGiving and then be crowned our Christmas Campaign of 2017. We’ll reveal who the winner is on 15th December and promote them across our key marketing channels and make a £2,000 donation to the cause. Two runners up will also receive a donation of £500.

Discover how your charity can become JustGiving’s Christmas Campaign of 2017.

christmas appealsIndividual givingjustgiving tipsonline appeals
Evey is a customer success manager at JustGiving working with charities to help them make the most of JustGiving's tools and insights.
Scroll To Top