Turning a miss into a hit – lessons from Big Ben 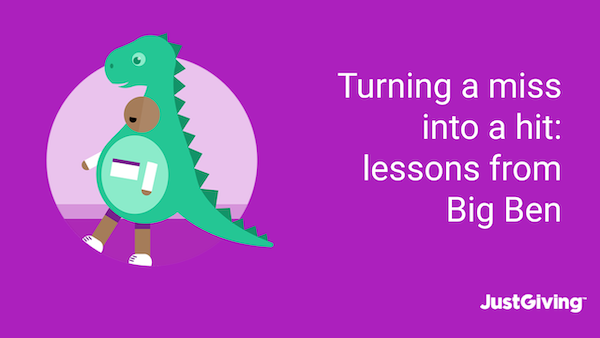 Well, not the actual Big Ben – bear with us.

It can’t have escaped your notice that the Virgin Money London Marathon was last weekend. 26.2 miles of pounding pavements, buzzing crowds and millions of pounds raised for some very worthwhile causes.

One runner who has gained a lot of attention is Lukas Bates, who ran the gruelling race dressed as Big Ben to raise money for Alzheimer’s Research UK and Alzheimer’s Society’s Dementia Revolution campaign. Lukas did a brilliant job, but ran into some unforeseen problems right at the end, when he found his costume was too tall to cross the finish line.

We’ve all had those heart-sinking moments in our careers – that hot/cold nausea that accompanies noticing the typo in the direct mail piece to thousands of supporters; the head-desk moment of realising you’ve called someone the wrong name in an email; the ground-swallowing wishes that accompany the realisation that you’ll have to report on a failing campaign to your senior colleagues.

But here’s the thing: getting stuck at the finish line notwithstanding, today, Lukas’ fundraising page had hit over £6600, from a target of £1000. He appeared on BBC 5 Live Breakfast talking about the incident, giving another boost to his fundraising.

By being front and centre and laughing along, Lukas pushed the cause he cares about and turned a disaster into a triumph.

Sometimes it really pays to own your mistakes – to present to your trustees on a campaign that didn’t work; to apologise for calling someone the wrong name; to learn not to do that again. Only when we’re learning can we improve.

I will leave the final word to Michael Jordan, regarded by many as the world’s greatest basketball player:

“I have missed more than 9,000 shots in my career. I have lost almost 300 games. On 26 occasions I have been entrusted to take the game winning shot, and I missed. I have failed over and over and over again in my life. And that is why I succeed.”