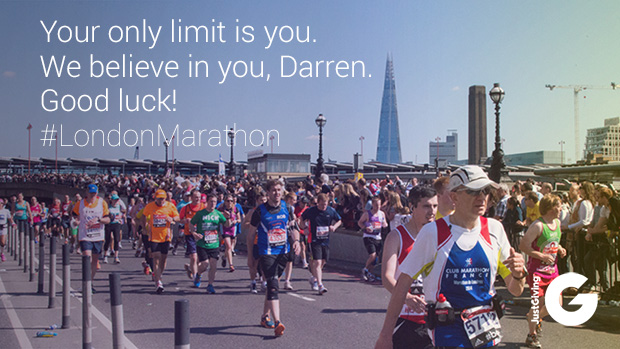 A shift in consumer behaviour has required charities to rethink the way that they communicate with existing supporters and reach out to new ones. CRM tools, an explosion of digital devices and the ability to integrate with social networking sites has made it easier to collect rich data about supporters. But how do you use this data to deliver a personalised digital journey, whilst still showing a human side your organisation?

Raising money is about real people doing real things for the causes they care about.

Fundraisers want to be spoken to like a human being, in the place they spend time talking to their friends and family: social media.

That’s why this marathon season we took to Twitter to personally wish hundreds of London marathon runners good luck, support them on the day and then congratulate them afterwards.

Here are five things we learnt about personalisation:

Publicly recognising the great work your supporters are doing will mark the start of a beautiful relationship. It may nudge them towards supporting you in the future and by engaging in conversation, their entire networks will see that there are real people at the heart of your organisation

2. Images help tweets stand out from the crowd

Twitter has become a visual space. We know that tweets with images get 35% more Retweets, and our personalised London landscapes were no exception. They stood out in news feeds and a whopping 80% received engagement. Image tools like Flickr, Canva and PicMonkey make creating social media designs a fun and free task.

3. Listening gives fans a voice, and in time they’ll be talking for you

People, not organisations, are at the heart of the sector. Listening and engaging in conversations with your supporters on Twitter means you’ll be closer to the advocates of your charity whilst nurturing those who may become advocates in the future. By personally recognising people, you’re conveying your message in a meaningful way, without rudely bustling into people’s news feeds. You’ll also gain valuable insight into the types of conversation surrounding your organisation on social.

4. A personal approach doesn’t have to be expensive

You may be reaching out to individuals one-by-one, but think of your potential reach when supporters get that warm and fuzzy feeling and share their tweet with friends. There are a whole host of free tools that you can use to create amazing messaging too:

By creating ‘search’ columns, Tweetdeck can help manage the conversation amongst your supporters and help you target those participating in an upcoming event or campaign.

Tools like SocialBro and Tweriod can tell you the best time of day to reach out to your community.
Cameras on smartphones and tablets make it easy to create content that’s human and warm, whilst a host of free image tools make it quick and easy for you to create social media content that looks amazing.

Those we reached out to in the run up to the London marathon turned their personalised tweets into cover images and even reshared them to strengthen their ask for donations. Whilst increasing engagement and developing brand trust is key with this kind of project, perhaps you’ll find it has a positive effect on amounts raised too. Those we reached out to received a higher number of donations than average for this event.

Personalised content is a great way to reach the right people at the right time.

communicationsLondon marathonpersonalised social mediaTwitter
Catriona makes sure the JustGiving Community is supported across our social and digital channels, whilst telling the stories of our amazing fundraisers and donors to help inspire others.
Scroll To Top