What your charity can learn from Taco Bell 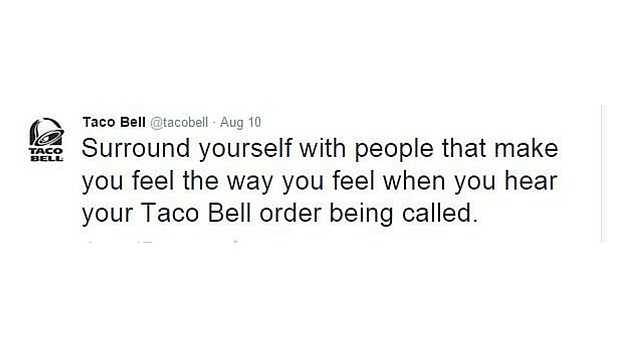 At first glance, you might not think that American Tex-Mex fast food chain Taco Bell could have a lot to teach the charity and nonprofit sector – but you’d be wrong. The taco and burrito-peddling franchise is absolutely on point when it comes to their social media activity – to the point where, for many, their social media channels (particularly Twitter) have become destinations in their own right.

They have a funny and often sassy tone, are quick to jump on trends, and retweet and share just the right amount – and the right kind – of content. This makes it feel like you’re not following the account of a major corporate, but of a whip-smart, hilarious friend. As a result, they have an intensely engaged audience – even in countries where the chain doesn’t have franchises. Taco Bell’s social presence goes beyond digital customer service or branding, but has reached almost a celebrity status, with users wanting to engage with the brand in order to get a similar sassy reply for themselves.

So what tips can your charity take from Taco Bell’s social media success?

Fundraising for a cause – particularly when the subject matter isn’t lighthearted – can be a lot more challenging than selling triple layer nachos. But there are several lessons to be learned from Taco Bell, which can help your organisation step up on social.

1. Know your audience – and speak their language

Taco Bell’s strongest demographic is the Millennial generation – born between the ‘80’s and the early 2000’s – and they know it. Whether they’re complaining about the lack of a taco emoji or quoting ‘Mean Girls’, Taco Bell are speaking to Millennials – and they really get them.

Then look what happened:

Thinking about a future with the taco emoji. Shout out to @TacoBell for making that happen. pic.twitter.com/mQJAcpFkrn

Taco Bell have found their niche – which might be slightly trickier for charities and nonprofits to do, but is not impossible. Try to move away from the idea that your social presence needs to be ‘all things for all audiences’. Analytics tools can help you discover who your cause resonates with and testing your content can help you understand who you are – and need to be – targeting for your social media activity.

Happy Birthday to the Taco Bell Queen herself, @baylynnejoy. Hope you like your present. ❤ pic.twitter.com/63mb2w4slK — Taco Bell (@tacobell) June 24, 2015

Taco Bell are experts at harnessing the power of influencers, by openly sharing and interacting with them on social media. This allows them to harness the power of their influencer’s networks too, like model Chrissy Teigen and YouTuber Tyler Oakley. They’ve become ‘friends of the brand’, and the organisation carefully cultivates and maintains these online relationships – thanking them online, congratulating them on recent events and interacting with them on a personal level, like sending Teigen a personalised ‘Taco Bell’ ring.

Charities can take two lessons from this

First, by openly engaging and interacting with social media influencers in order to harness their networks to champion your cause, but also to thank donors and supporters. Charities and nonprofit organisations often integrate fundraising into their activity, but often fail to acknowledge and thank donors at a later stage. Acknowledgement is a crucial part of fundraising success for charities – just ask Cystic Fibrosis Ireland.

For them, acknowledgement is a key driver of social media engagement: “For fundraising events, we put up thank you posts that include a photo and a call to action for next year’s event. When we do this, we see far more comments, messages and queries from people. Then it’s up to us as fundraisers to engage them.” With photos helping to boost the visibility of these posts, and the call to action inviting others to get involved, the charity has found a way to transform thanking one person or group into an opportunity to inspire participation in future events.

Taco Bell aren’t afraid to talk back – they are quick-witted, and will point out to other brands the errors of their ways, such as the Twitter exchange with Old Spice pictured below. While starting a spat on social media is something you should on principle avoid, they’ve learned how to take calculated risks and are constantly testing their audience. 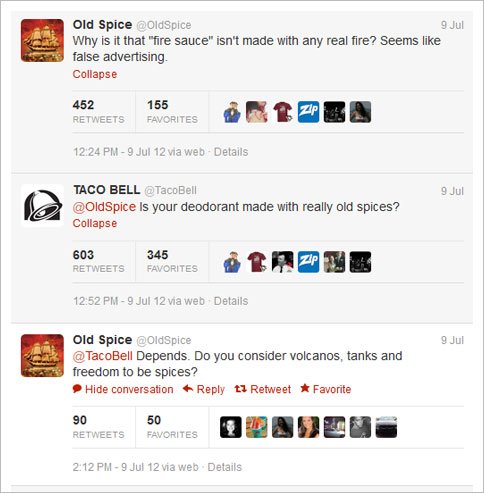 Charities and nonprofits should also take similar risks, on a smaller scale – run experiments and A/B test different styles and types of content to see what works for their organisation. There’s an element of risk with all social media activity, but learning to embrace failures and learning from them can be just as valuable as the successes.

Consumer brands know how to talk to their customers on social media, but many charities have yet to adopt an audience-led approach. Regurgitated press releases might appease senior management, but is very unlikely to result in social media or fundraising success. Make sure your social media strategy and content plans are created with the target audience in mind.