What’s up with WhatsApp and charity giving? 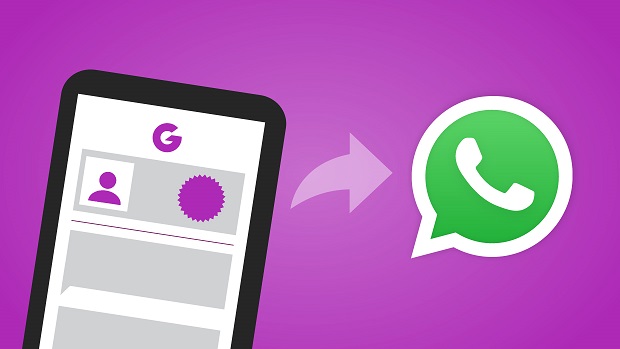 The continuing rise of mobile adoption is hardly a new thing, but its impact is shown in different ways – not just in the fact more people are using mobile phones to do just about everything, but the apps people use most are changing too.

Consider this data from AppAnnie in a Techcrunch article about the top apps around the world.

For UK users on Android, WhatsApp is the most used app on their phone. This was surprising to me, since Facebook has been the dominant mobile app for so long: as recently as July last year, it accounted for 1 in every 5 minutes of US users’ time spent on mobile.

This new data may have been surprising, but it was also an opportunity

With this growth in WhatsApp usage in the UK, we wanted to see if it was a channel people would use to talk about fundraising.

At the start of April, we updated our iPhone app to enable fundraisers and their supporters to share a fundraising page to WhatsApp. We already enabled sharing to Facebook, Twitter, email and SMS.

During April and May, over £1 million was donated on JustGiving as a result of shares from the iOS app. The vast majority of donations (70%) has come from Facebook shares, with each share being worth a whopping £44 on average – roughly two extra donations per share!

This data is explained by the fact that most app users are fundraisers sharing their own page to their own networks, so they are talking about very personal efforts to a very warm audience – their friends.

We see very high conversion rates for these shares, and it’s been encouraging to see WhatsApp make up almost 7% of donations with almost £80,000 donated, at an average of £28 raised per share. But WhatsApp shares also had the second highest conversion rate after email, which suggests fundraisers are reaching some of their closest contacts on WhatsApp. This makes sense on reflection – a Facebook share may reach over a hundred friends, but you’re unlikely to use a messenger app to reach so many people in one go.

Following the success of adding WhatsApp sharing to the iOS app, we recently enabled people using JustGiving on the mobile web to share their donations on WhatsApp (as you may have read in Civil Society). 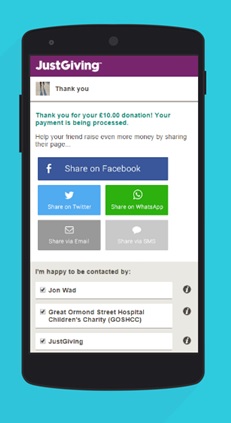 Once a donation has been processed, we added the option to share to WhatsApp alongside other sharing options we’ve presented for a long time.

As a result, donations via WhatsApp (that we have been able to track) have now exceeded £100,000. This may be a small number in comparison to overall JustGiving numbers, but it’s significant as we’ve not see any fundraising appeals successfully raise money via WhatsApp until now. Given the ever-growing popularity of the app, we only expect this to grow too.

What’s been interesting adding these new sharing options is seeing which networks people are choosing to share to.

On mobile, Facebook still dominates with a whopping 90% of shares (hence it being the biggest button), with Twitter a long second place at 5% –  just beating WhatsApp at 3.5%. The remaining 1.5% of shares go to SMS and Email, with SMS marginally higher for sharing.

On desktop, Facebook accounts for 88% of shares, Twitter 10% and Email the remaining 2%. Being mobile only channels, you can’t share to SMS or WhatsApp on desktop. Well, for now at least – we see a few donations via a WhatsApp web portal, but the numbers are very small right now.

Following the success of adding sharing to WhatsApp, we’re going to test whether people will share to Facebook Messenger from our iOS app. Clearly people are using messenger apps more and more, and it follows that if you talk to someone more regularly, you’re more likely to be closer to them. And they’re more likely to respond to you making a fundraising ask. In theory, at least.

But the good thing about the fast pace of technological change, especially on mobile, is that we can test it quickly to find the answer so watch this – very exciting – space.

Interested in learning more about mobile fundraising? Come along to our Innovation Meetup.

A/B testingdatadonationsFacebookfundraisingmobile givingWhatsapp
Jonathan is the social and labs product manager at JustGiving, specialising in social media integration, digital strategy and online fundraising. He's fascinated by how the social web has revolutionised the way people interact with each other and how charities can use the internet to create enormous value for them and their supporters.
Scroll To Top